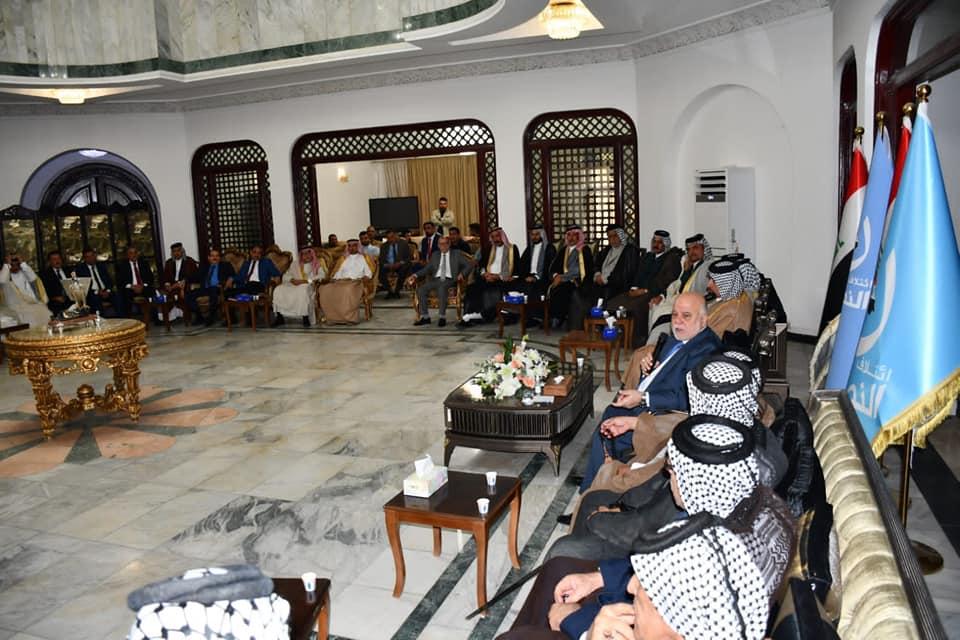 Dr. Al-Abadi welcomed the guests, praising the role of the tribal sheikhs and their ability to help change the general situation of the country.

Dr. Al-Abadi spoke about the political blockage represented by the failure to form a government capable of managing Iraq, serving its people, and meeting the needs of society, as well as the economic situation that the country is going through today, despite its wealth and financial revenues from oil exports that are not properly managed and poorly controlled.

Al-Abadi reviewed the changes in the experience of his rule, including changing the behavior of the army and gaining people’s trust and respect in it, by controlling issues that are not complicated but have a great impact, and this is what the leader must do; the real leader is the one who can direct people to the right path.

Dr. Al-Abadi pointed out the possibility of freezing differences and moving towards the greater goal, which is to extinguish the fire of sedition and unite the word.

On the other hand, tribal sheikhs and notables praised Dr. Al-Abadi’s rule of the state and the achievements he made, the most important of which was achieving victory over ISIS, restoring Iraq’s lands, fighting sectarianism, managing the economic crisis under the collapse of oil prices, and preventing the scheme to divide Iraq.

They emphasized that the next stage, as in 2014, needs a rescue operation through a wise, careful and experienced leadership. There is no time to waste reality in jurisprudence, and Dr. Haider al-Abadi is the one who meets the specifications of the man of the stage.

They also expressed a number of needs for Dhi Qar Governorate, including providing essential services for daily life, the reconstruction of its infrastructure, pay attention to various sectors such as the agricultural and security sectors, and the provision of investment opportunities to create work environment for young people and reduce unemployment.