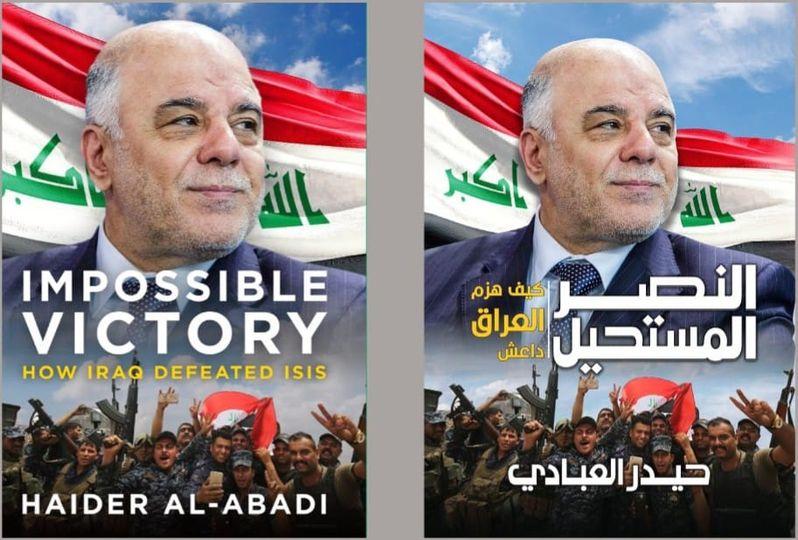 The book of "Impossible Victory: How Iraq Defeated ISIS" was published by Dr. Haider Al-Abadi, the Commander-in-Chief of the Armed Forces at the time. He tells from the position of leadership the news of the grim phase that swept the country after ISIS took control of third of ​​Iraq area, and then the bright side of the story when Iraqis managed to defeat terrorism.

The book was published in Arabic by hikma.co.uk

And in English on bitebackpublishing.com

Dr. Al-Abadi says in the introduction:" This book is the product of a different dream – a dream I have for the future of my country. In it, I tell the story of how Iraq overcame one of the darkest, cruellest chapters in its recent history. One which, if things had turned out differently, could have been the beginning of an even darker age for the Middle East and the wider world. It is a story of a country on the brink of collapse, a people reaching the limits of their capacity to bear violence, pain and despair. A story of how Iraq, and Iraqis, came face to face with a brutal and nihilistic force that the whole world feared. How we fought it, and, in spite of everything that divided us, in spite of the cynical expectations of the watching world, we won".

The book is divided into three parts, the first part includes two chapters that can be described as a preamble to the subject of the book. In them, al-Abadi recalls the Iraqi history he was aware of since the sixties of the last century, reviewing interesting situation from his own experience of "peace and violence" spanning nearly five decades, and its impact on the subsequent reality. He invests those events to link them as a structure for the following chapters.

The second part consists of five chapters, which are the heart of the book and the subject of its title.

The reader will find answers to questions that may not occur to most observers of the battle, where decisions, conflicts and situations are not noticed; because they were under the piles of demolished buildings or were not heard because of the sound of weapons and some media that spread allegations and neglected the investigation of the truth. The Armed Forces Command insisted on making the difference in every part of the battles, regardless of how big or small the situation is. It was keen to make every detail and from any angle appear justly to make the right decision.

While the third part of the book includes two chapters, Al-Abadi cautioned that the matter of victory cannot be considered finished simply by crushing terrorism. The author brought us back in an easy and clever style; to mention how the events of history are similar, as are the fates of humanity everywhere in the face of today's challenges.

The third part of the book revealed the keenness to exercise responsibilities in diagnosing each problem separately, without allowing the contradiction of wills, the multiplicity of opinions, and the pressure of time, to affect the correctness of taking the appropriate position, and the sincerity of the position’s expression of a real need and not protecting the special interest of an individual or an entity.

You can view the signing ceremony in the following link: