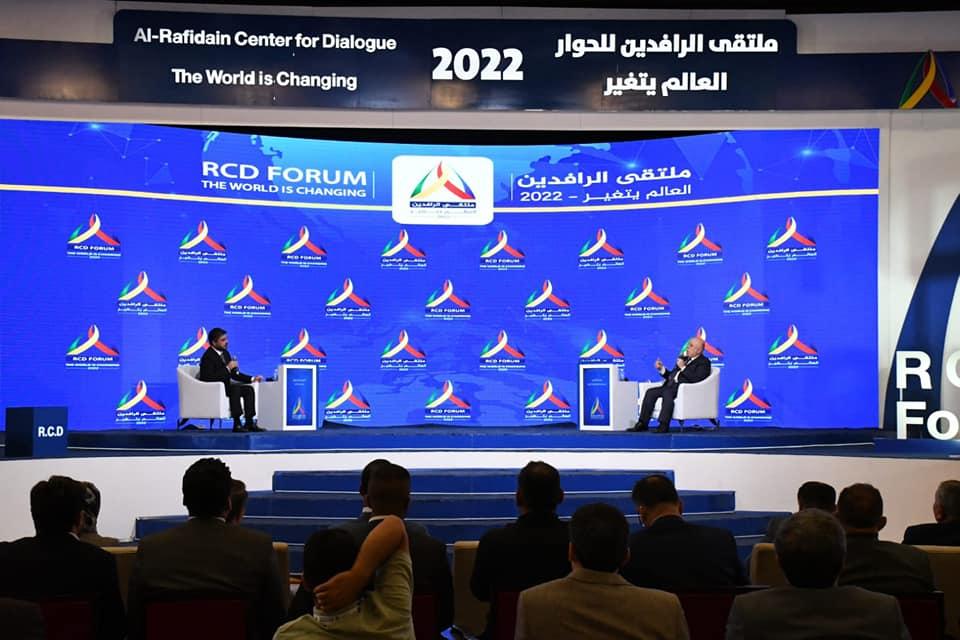 During his participation in Al-Rafidain Forum, Dr. Al-Abadi calls for the necessity of dialogue for the conduct of the political process

Dr. Haider al-Abadi, the head of Al Nasr Coalition, called during his participation in Al-Rafidain Forum of this year, for the necessity of dialogue that brings together all political parties for the conduct of the political process.

Al-Abadi said: "It is not possible to build the state and proceed with the conduct of political life without dialogue between the blocs on the basis of the public interest, not the private one".

Al-Abadi explained that the problem is not the choice of the majority or conciliation as a method of running the state. Rather, it lies in the failure to advance the interests of the people and the country; therefore, dialogue or conflict that aims to secure the gains of the political blocs only and not solve the problems of the people and the state, will lead to a loss of people's confidence in the entire political process, and this is a fundamental loss.

Dr. Al-Abadi called on politicians to be clear in front of the people, and to have the courage to change their opinions and positions publicly if the public interest of the state required that.

Speaking about the developments in the political process, Al-Abadi confirmed that he did not sign the “political agreement” document and did not authorize anyone to sign it, and at the same time he did not reject all of it, but he completely rejected all of its contents of matters that political leaders have no right to act on. Al-Abadi stated that in 2014, in order to vote on his government, he received an offer that contained the contents of today's document, but he rejected it; because he did not have the right to act and overtake the contexts of the state and the government.

Al-Abadi also stressed that the conflict of interests today is not inside one house, warning against being drawn into the internal fighting that will burn everyone. He stressed that the Sadrist movement is an important part of the political process, and it has a large audience, and whoever thinks that it can be absent is mistaken and not aware of reality. On the other hand, Dr. Al-Abadi called on Mr. Muqtada Al-Sadr to engage in political dialogue and overcome differences; because the country can only cross to safety with cooperation.

In response to a question about the possibility of him becoming prime minister, Dr. Al-Abadi replied: "I have no ambition to become a prime minister, this is evidenced by what I did in 2018, when I did not harness the capabilities of the state for my election campaign, I even prevented the security forces from promoting me, and I did not contract political deals at the state's expense. I see the need for the next government to focus on protecting the country and preventing it from slipping into internal fighting".

Dr. Al-Abadi stressed the importance of the role of social movements in political reform, saying that it is not permissible to accuse the Tishreen people and to look at their numbers and evaluate them, but rather to look at their demands, as these keen young people are the ones who lead the future; here is our responsibility to contain them. Al-Abadi also expressed his belief in the ability of the demonstrations to reform the state and put pressure on politicians, but he warned against demanding the overthrow of the entire regime without an alternative, by those who tend to clash only; because this will lead to chaos in which the corrupt and those who have weapons will be bullied, and the general public will not find anyone to defend their rights.