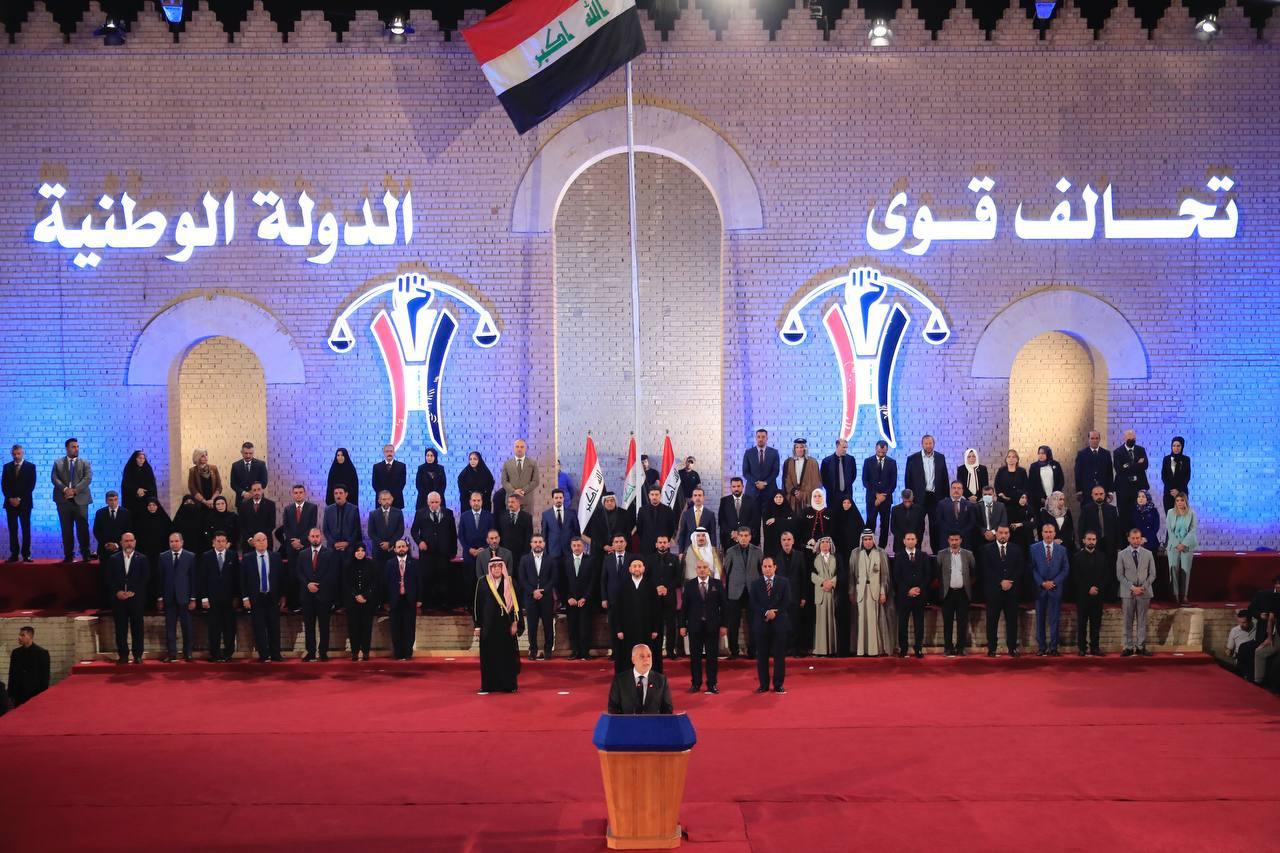 The official announcement of The Alliance of National State Forces

The Alliance of National State Forces participating in the October 2021 elections was officially announced, this evening, from the Babylonian theater.

Dr. Haider Al-Abadi, head command of the National State Forces Alliance, said: "Today we stand in front of you to gain your confidence in us as a national coalition that aims to get rid of chaos, lawlessness, corruption, dependency and all non-state projects, the coalition is moderate political electoral alliance that believes in the state, works for it, controls it, and sees it as a necessity to preserve the entity of Iraq and the higher interests of the people".

He added, "The more the state is strong and rational, the more it integrates and becomes more affluent, advanced and sovereign. Failure to produce a just state means the success of non-state projects. We see that the system of ethnic political consensus, quotas, corruption, fragmentation of the unity of decision, and insulting the will of some to the foreigner, are all components of non-state and must be confronted".

Al-Abadi continued: "The political identity of our alliance revolves around the state as existence, structure, functions, and sovereignty".

He pointed out that our coalition has the vision, management, and programs to save the nation, and we have rich experience in governance. We saved the country in 2014-2018 when it was swept by the black terrorism, and Iraq was on the verge of political, economic, security, and sovereign collapse.

Al-Abadi stated that our demonstrating young men in October want a state, and this is our slogan: "We want a state".

Al-Abadi addressed the people, saying: "You have experienced our experience in governance and outside it, as we did not compliment, betray or flee", vowing to complete the tasks of building the state, combating terrorism, crime, and uncontrolled weapons, social and service rehabilitation, advancing the economic reality in all its aspects, and developing the investment environment.

Al-Abadi concluded his speech by saying: "The choice in the upcoming elections is great and historic. Do we want to take Iraq to the state where the future is? Or do we choose to return to the non-state where the unknown is?"

The announcement activities included reading the Holly Qur’an, listening to the national anthem, the coalition anthem, and the speech of the coalition’s president, Ammar al-Hakim, in which he said: "Our young generation today is completely different from yesterday in its aspirations, awareness, and understanding the course of the political action".

He stressed: "We need a social and political contract that enables the Iraqis to build the state and choose a capable government, especially since everyone today wants, calls, and aspires to establish a strong, independent, stable and prosperous state. A state that is not subject to regional and international wills, a state that is not arrogant over its people, and does not think outside the dreams and legitimate aspirations of its sons".

The announcement included the participation of the Alliance candidates for the electoral districts in the Iraqi provinces, amid a large public presence.